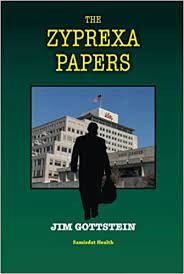 Alaska lawyer Jim Gottstein, showed Eli Lilly had concealed that its top-selling drug caused diabetes and other life-shortening metabolic problems. The “Zyprexa Papers,” as they came to be known, also showed Eli Lilly was illegally promoting the use of Zyprexa on children and the elderly, with particularly lethal effects. Although Mr. Gottstein believes he obtained the Zyprexa Papers legally, the United States District Court for the Eastern District of New York in Brooklyn decided he had conspired to steal the documents, and Eli Lilly threatened Mr. Gottstein with criminal contempt charges. In The Zyprexa Papers, Mr. Gottstein gives a riveting first-hand account of what really happened, including new details about how a small group of psychiatric survivors spread the Zyprexa Papers on the Internet untraceably. All of this within a gripping, plain-language explanation of complex legal maneuvering and his battles on behalf of Bill Bigley, the psychiatric patient whose ordeal made possible the exposure of the Zyprexa Papers