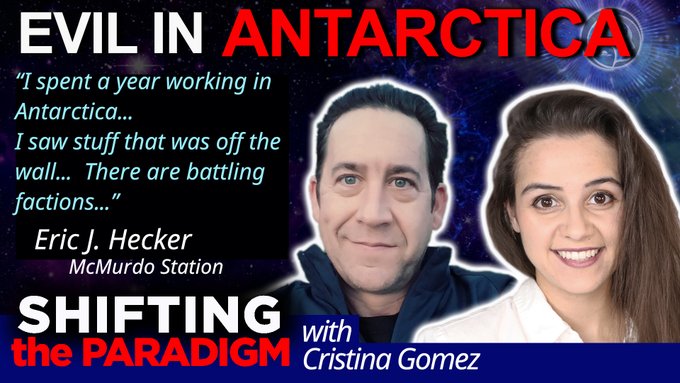 Eric now resides in Alaska and has appeared in many TV Documentary Shows, most notably about Mysteries in Alaska… GET NOTIFIED OF NEW VIDEOS – https://www.youtube.com/c/ParadigmShi…

USE CHAPTER INDEXES ON TIMELINE TO NAVIGATE THE SHOW All my Social Media Links: https://beacons.page/cristinagomez This show also streams on KUNX Talk Radio – https://www.unXnetwork.com/ and affiliates.

The theme of mysterious Antarctica is no stranger on this channel. On the show ‘Mysteries with a History’, Jimmy Church and I recently covered many mysteries alleged to have occurred, and still are occurring in Antarctica. From UFOs to secret bases, and secret alien bases, to vastly ancient technologies and ruins of cities from epochs ago. Currently residing in Alaska, Eric is a self educated research investigator that takes from his many odd life experiences and connects with others. Eric was raised on Long Island the home of the now famous Montauk Project. His childhood included being part of the Stargate Project run by the CIA/DIA. Later on he had experiences in the Submarine Service. Following that he became a plumber for some of the wealthiest people in the world back on Long Island. In 2010 Eric took a contract to work at the South Pole Station for a year. Always the avid researcher, it was not until Eric began working remotely throughout the State of Alaska that he started making connections that his own life may not have been what he thought it was. Now he is trying to help others see that things may not be as we were told!!!